William Singer, the brother of Charlie, Jackie and the late Tommy Singer, has used various hallmarks since 1972: SD (both side by side and offset as below), SDX, SDXX, SDV, S/D, all variations of the Singer-Dodge family shop hallmark.

Here is an example of William Singer’s chip inlay – a buffalo belt buckle. 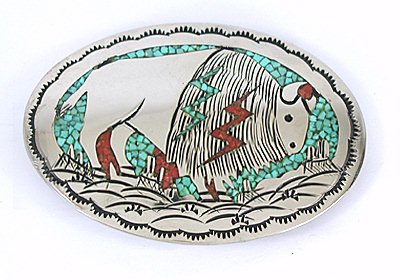 Tommy Singer has been credited with first using chip inlay in 1970. His brother began using the technique in 1972.

What is Chip Inlay?

Chip inlay is a method where cavities in jewelry are filled with a mixture of crushed stone, typically turquoise and coral, and epoxy resin. The piece is then polished smooth after the resin has hardened

We hope you find some special treasures in our new or vintage shops - Paula.

Do you have a question? If so, use the search tool at the top of this page or the Menu in the right hand column below to find what you need.

Do you have vintage Native American Jewelry that you want to sell?
If so, click below to read an article that outlines the process.
Do We Buy Jewelry?

Read All About It