This collection is from the estate of a woman who owned and operated retail clothing stores in Pinetop and Show Low, Arizona from 1973 to the mid 1980s.

She ran the stores on a day to day basis and knew many of the Santo Domingo, Navajo and Zuni women who shopped in her stores. They would often bring in their hand-made jewelry to trade for clothing. She was glad to trade with the women and she sold their jewelry in her stores.

The store owner’s heir, her son, said that since his mother knew the women personally, she never wrote down their names so he has no record of who made the jewelry items she took in on trade.

The work is beautifully done and the materials are excellent – perhaps you will recognize the work of one of your favorite collectible artists from the 1970s and 1980s.  Visit the necklaces from the clothing store collection by clicking here. 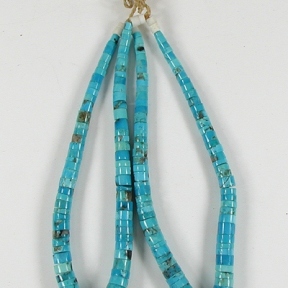 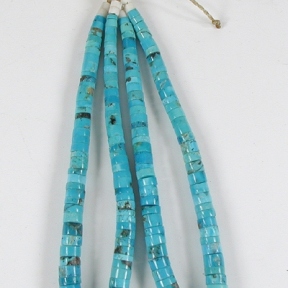 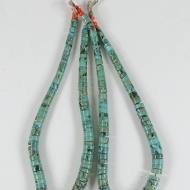 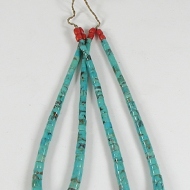 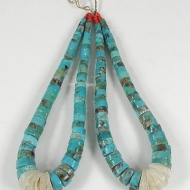 Here are some jacla style necklaces 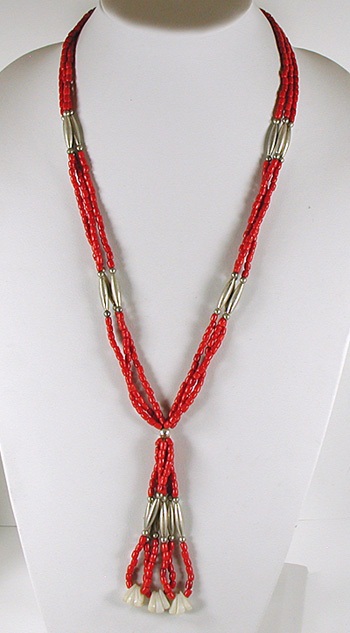 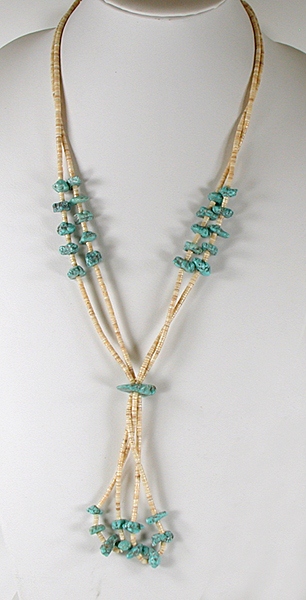 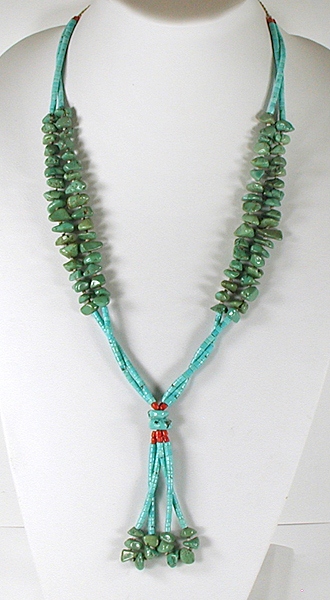 Beautiful turquoise stone necklaces from when when turquoise was a little easier to purchase ! 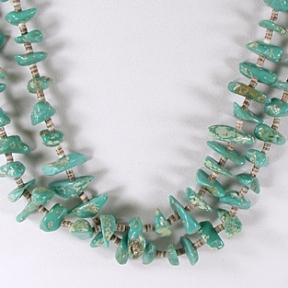 Hello sorry to take up a few moments of your time but I came across these 2 necklace at an estate sale and was wondering if you knew where I can find a buyer, and to advise if the turqoise is authentic.
Would you be able to direct me.
Thank you 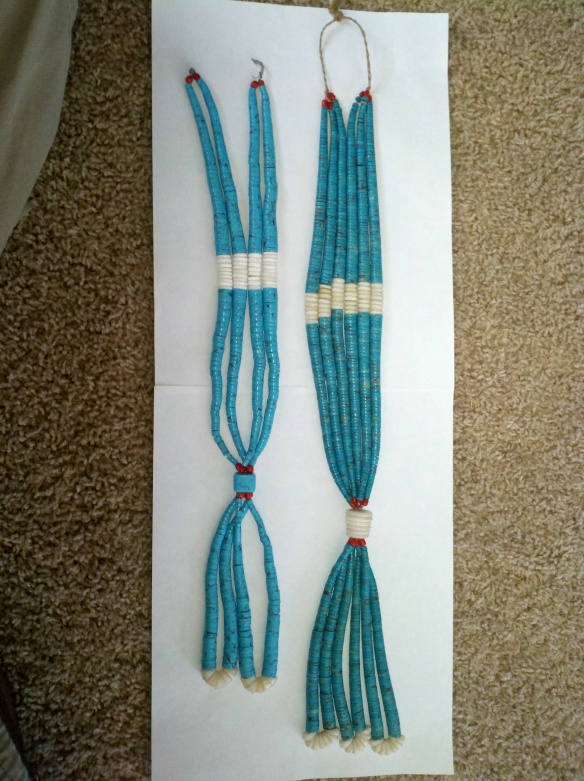 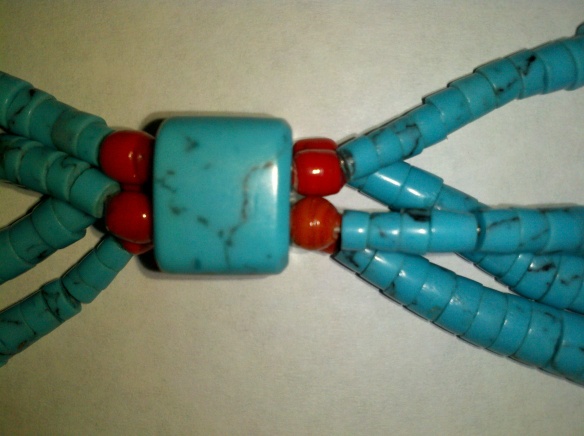 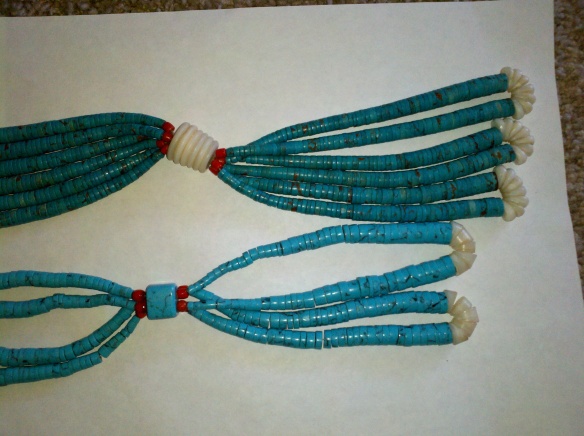 My gut feeling is that the lighter one is block turquoise and the darker one could also be block turquoise or could be stabilized turquoise. It is always easier to tell in person that with photos.

You can read all about various types of turquoise, natural, enhanced, stabilized, block and more here in this article Turquoise Used in Native American Jewelry

You can read more about jaclas in this article Jacla, Jackla, Jocla………No matter how you spell it, what is it?

Yours are similar to this block turquoise necklace we have in our pawn shop.  Click on the photo below and it will take you to the page with more details.

As far as where to sell – perhaps eBay?

A traditional Pueblo jewelry adornment, a jacla is two loops of heishi that were originally earrings and sometimes fastened to the bottom of a stone necklace as a pendant-like attachment.

Jacla is Navajo for “ear string”. The Navajo spelling is the most commonly used version of the word. Jocla is also common but jackla is a phonetic mis-spelling. Although jaclas are attributed to the Rio Grande Pueblo Indians, they were traded with other tribes so have become associated with the Navajo as well. They are seen in vintage photos being worn by members of all southwest tribes, both men and women.

In the oldest style necklaces, the jacla is a pair of loop earrings tied onto the necklace. 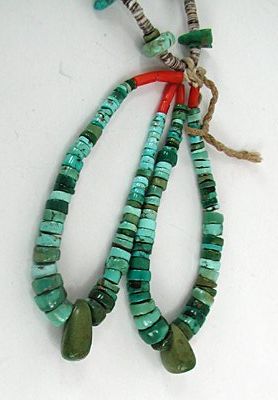 The two loops would be removed from the necklace and used as earrings.   This is how the jacla originated. This necklace is likely from 1910-1920.

I can picture a pre-European-contact Rio Grande Puebloan taking his or her jewelry off and storing it that way. And sometimes when not wanting to wear earrings, just leaving the jacla on the necklace as a pendant.

The jacla might match the necklace it is attached to or be of contrasting heishi. Most jaclas have tabular pieces in the bottom center that are called “corn”. They are most often made from white or orange (spiny oyster) shell or coral. According to Mark Bahti, author of Collecting Southwestern Native American jewelery, jaclas with spiny oyster shell corn are rarely seen and highly prized by many Indians.

The tips of the jacla loops are traditionally finished off with coral, a contrasting shell or trade beads, often red.

In the early 20th century, jaclas started to be incorporated into part of the necklace, so this necklace would have likely been made after 1920, likely in the 50s. 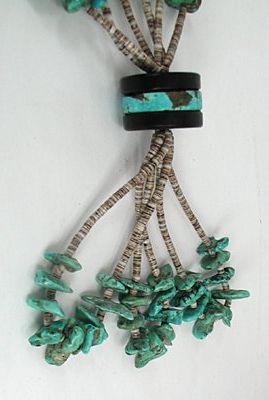 Contemporary artists use the jacla design in many ways such as this block turquoise jacla necklace with spiny oyster corn. 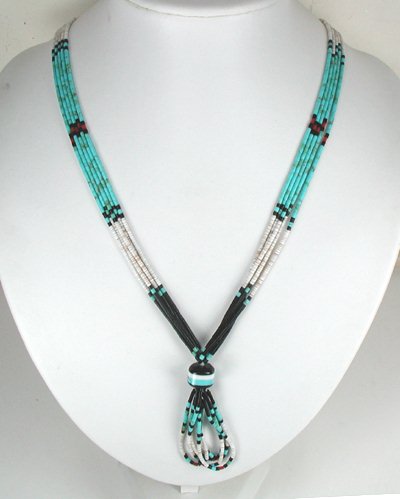 Loop earrings are basically a miniature version of a jacla – they are made with and without corn.

We hope you find some special treasures in our new or vintage shops - Paula.

Do you have a question? If so, use the search tool at the top of this page or the Menu in the right hand column below to find what you need.

Do you have vintage Native American Jewelry that you want to sell?
If so, click below to read an article that outlines the process.
Do We Buy Jewelry?

Read All About It