As Hurricane Sandy looms on the east cost of the US, I started noticing spirals everywhere.

The spiral is one of the oldest symbols used by humans. It appeared thousands of years ago in southwestern Native American tribal areas on cave walls and on ancient pottery.

Spirals to the Zunis and Puebloans represent water, wind and creatures associated with water such as snails and serpents.

It also represents man’s  “ journey in search of the center”.

From Petroglyphs, Keam’s Canyon, Hopi Mesas, Arizona “It is a decoration of great frequency and consisting of single and double spirals. The single spiral is the symbol of Ho-bo-bo, the twister who manifests his power by the whirlwind. The myth explains that a stranger came among the people, when a great whirlwind blew all the vegetation from the surface of the earth and all the water from its courses. With a flint, he caught these symbols upon a rock, the etching of which is now in Keam’s Canyon. It is 17 inches long and 8 inches across. He told them he was the keeper of the breath. The whirlwind and the air which men breathe come from this keeper’s mouth.” 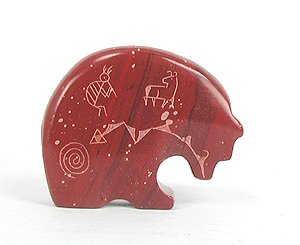 The spiral also symbolized a way of planting, starting at the center and moving out in circles as they planted. In Navajo it was called ha’oolmaaz

Be safe brothers and sisters.

7 thoughts on “The Spiral in Native American Jewelry and Artifacts”