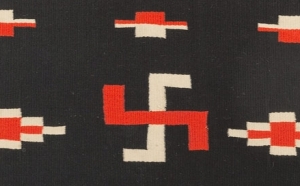 The design of the Whirling Logs is similar in appearance to the symbol of horror associated with the Nazis.

Swastika is Sanskrit meaning “well-being”. Throughout most of history, it has been associated with order and stability. The unfortunate association of the swastika with Hitler understandably makes some people uncomfortable when they see a similar symbol on Native American baskets, rugs and jewelry.

To distinguish Whirling Logs from Hitler’s Swastika, some try to make a distinction between which direction the figure appears to rotate, clockwise or counter-clockwise. But if you look at a whirling log on the outside of a Native American basket and it is whirling counter-clockwise, that same design will be whirling clockwise on the inside. Similarly with a woven rug – each side of the rug would show the symbol whirling a different way. So that is not distinction. 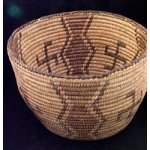 after learning of the Nazi association, the Navajo discontinued use of the symbol

^ Dottie Indyke. “The History of an Ancient Human Symbol.” April 4, 2005. originally from The Wingspread Collector’s Guide to Santa Fe, Taos, and Albuquerque, Volume 15.

Whirling Logs are used in Navajo sand paintings during a healing or other type of ceremony. A sand painting is supposed to be a temporary piece of art which is destroyed after the ceremony is over. However sand painting designs are also used in prints and framed paintings, rugs and on jewelry.

The Whirling Log symbol is associated with a narrative involving a man (sometimes called the Culture Hero) who takes a journey down the San Juan River in a hollowed out log canoe. During his adventure, he encounters whirlpools and a special event where the San Juan River meets the Colorado River.  There he comes upon a whirling cross with Yei figures seated on the cross. From the yeis he learns much knowledge which he takes back to his people.

Since World War II, the use of the Whirling Logs in Native American artifacts has been confined mainly to rugs. Jewelry with the symbol is usually from before 1940.

The Use of the Swastika Symbol in American Indian Art